If you were following me on (the now defunct) Google+, you may recall me mentioning that I was going to participate in the Coursera course on Human-Computer Interaction. Well I did, and now that the course has finished, I wanted to share my experiences with you.

While I had expected to learn a lot from the course, having worked as a Software Engineer for over twenty years I really didn’t expect to find the course as hard as I did. Apparently I wasn’t alone either – out of approximately 29,105 people who watched at least some of the videos, and 10,114 people who filled out the initial survey, a small subset of 2470 completed at least one of the major assignments and only 791 completed all 5. Or to look at it another way, just 32% of the people who attempted the assignment-based track managed to complete it. I was not among the 32%, having fallen by the wayside on the final assignment – there simply wasn’t enough time for me to do what was necessary while still doing my normal job, and spending at least some quality time with my kids. 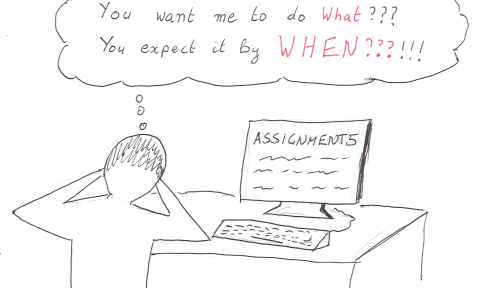 Several of the assignments took me outside of my comfort zone. For example, when I need a diagram to communicate a particular point I almost always reach for a piece of software like Xara (or for the less wealthy, Inkscape). Imagine my horror when we had to submit a hand-drawn storyboard! (What??? You mean I have to make my handwriting legible? I can’t go back and fix-up that line so it looks just right? And it’s due when? That’s impossible!) Still, having signed up for the course I decided I would do as much as possible of the assignments – at least up until the final one, where it was obvious right from the time it was handed out that it would simply not be possible to complete along with my other commitments in the time available.

Even though I didn’t finish the assignments, I still feel that taking the course was a valuable experience for me. If nothing else, it reminded me not to be too complacent about my skills, but it also reminded me how important it is to broaden your experiences. In this age of social networks, vast numbers of TV channels and an almost infinite array of on-demand content it is extremely easy to fill your life with more of the same things that are already there. Don’t like a particular type of music, or political view? No problem – just hit the "mute" button, "unfriend" them, or add the site to your internet filter so you never have to see it again.

I can almost hear the question now... "But why would I bother with things I don’t like, or agree with, when there is so much good stuff available?" Well that’s a good question, but it’s one that I’ve observed can be a product of laziness. People may say "I don’t like it", or "I can’t do it", but what they are really saying is "I haven’t taken the time to understand it". I’ve certainly used excuses like that in the past, and judging from the way my kids react (there is a good chance that their reactions are a reasonable facsimile of those they see around them from me, my wife, their grandparents and in the case of my daughter her classmates) I probably still do from time to time. The problem is that unless you step outside your comfort zone you effectively eliminate even the possibility of finding new things that you love just as much, if not more, than the things you enjoy today. For example, if I hadn’t been willing 16 (gulp!) years ago to say yes to the opportunity to come and work in the USA I probably wouldn’t be sitting here now writing this article. If I hadn’t attempted NaNoWriMo last year, I wouldn’t have made some of the connections I have on Google+ and learned about all sorts of other things from wonderful authors I had never heard of before. Similarly, I probably wouldn't have been aware of the sad passing of John Lord who (via the albums "To Notice Such Things" and "Durham Concerto") contributed to the soundtrack of my NaNoWriMo evenings thereby helping to turn them from a chore into something that while still challenging I actually enjoyed.

Oh, and in case you were wondering I’ve already signed up for my next course. This time I’m going to be diving into World Music, even though I’ve never heard of Yothu Yindi, and have only a passing familiarity with the concept of Throat Singers. You’re welcome to join me. I’d also love to hear if you’ve got any course recommendations to share.